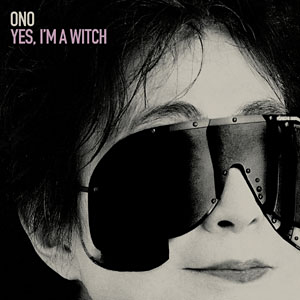 "The songs on Witch are unquestionably superb. 4/5 stars"
Slant Magazine

"Most of it's a wonder and a new manner of hearing Ono, not through a lens, but through a prism, as part of a swirling wave of color, texture, rhythm, and artifice that brings her rightful place to the forefront. Highly recommended."
AMG ( LISTEN NOW - YES, I'M A WITCH !!! )

"The title of this timely and hip set of remixes reveals a little of Ono's funny bone, so often hidden behind forbidding sunglasses. Also in evidence are Ono's tenderness, her pain and sense of the absurd, as well as her appetite for confrontation."
The Observer

"The best tracks are those that pick up Yoko's ball and run with it, pointing her original pieces in new directions. The Flaming Lips take Ono's improvised wailing and Lennon's feedback noise from the original "Cambridge 1969", looping fragments into more of a recognisable structure, on which they build a new avant-jazz stew of organ, wah-wah guitar, cymbals and horns. 4/5 stars"
The Independent

"If proud Britpop proletarians such as Oasis and Richard Ashcroft continue to give praise to John Lennon because “he just didn’t give a f***”, then they should be worshipping Yoko Ono as a goddess. 3/5 stars"
The Times

"What Yes, I'm A Witch proves, above all else, is that the world is at last catching up with Ono. Whatever her collaborators come up with, and in almost every case it's something that bursts with Yoko-like-wit, energy, ingenuity, there is no doubt that everything on this record exists in accordance with the Ono universe. 4 stars"
Mojo

"Let's consider this album a fresh start for a musician who deserves a chance with young ears. (--) Most artists choose to highlight Ono's often overlooked talent for delicate melodies, particularly Antony and the Johnsons' lush but never overbearing accompaniment to "Toy Boat."